skip to main | skip to sidebar

Posted by Starkadder at 8:01 PM No comments:

Posted by Starkadder at 7:58 PM No comments:

The Kindness of Strangers

My apologies for not posting anything for a while. The real world exploded with death in the family, new jobs and all the impedimenta of life. Something happened today which made me wonder about all of life's coincidences.

Every day I drive to work. It's around sixty k. each way so it's not a minor trip. It is mostly down country roads fortunately. Today I was about halfway to work when my car rattled and died. I was about 10k away from anywhere and so, without mobile 'phone cover, I resigned myself to walking to a mechanic.

I had barely gone ten metres when a car stopped and a woman got out. I realised with shock that it was my niece-in-law, Mel, whom I haven't seen since my brother in law, Andrew's, funeral. She travels even further than I do and in the opposite direction. She was early this morning with some time in hand. She drove me to the mechanic.

The mechanic turned up at the garage a few minutes later. He had a cancelled job so had time to go straight out to where I'd left the car. It was bad (new engine required, head gasket gone etc). This would take a week. He didn't have a courtesy car and there was no cab service within 20k. He was apologetic and really decent about it.

So once again, I started walking. Home.

Just for effect I threw my thumb out for a lift. A man stopped within thirty seconds and drove me halfway home. I thanked him, got out of the car and stated walking again. The thumb went out again. Thirty seconds later another car stopped and this driver took me to my front gate. Both men were unfailingly generous and really nice blokes.

I suppose the point of all this rambling is that, this morning, I met four good people, one after the other, all of whom went out of their way to help. For all the talk of a selfish society, I saw no evidence of it this morning. Only grace and friendship.

So thanks, Mel, Damian and the two drivers who picked up a middle-aged man wandering along a country road.
Posted by Starkadder at 8:16 PM No comments:

The Perseids and Me

Last night, my pal Stewart and I decided to check out the annual Perseid meteor shower. At about 1:30 in the morning, after an hour and half of freezing cold weather and half a dozen sightings we retired hurt, cold and confused to the warmth of the house.

I love astronomy. I just wish I had a heated indoor observatory.
Posted by Starkadder at 2:31 AM No comments: 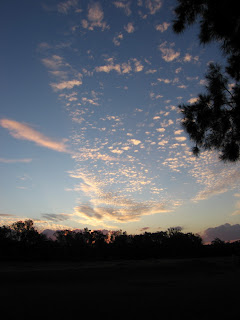 Our pal Dominic took this late afternoon shot from one of our rear gates recently. It's a great thing to be able to wander into the backyard and see such a wonderful sky.
The weekend was even better. Australia produces some truly glorious wines that unfortunates beyond the territorial limits never get to taste. Heh, heh.
There are few better things than a group of friends, home-grown food, local wines and evenings such as this one.
Posted by Starkadder at 1:21 AM No comments:

Welcome to the Station

Welcome to the Starkadder Line, devoted to those of us who like to muse on the mostly irrelevant. The Line derives from our small property, a place we're proud to call Starkadder Station. One day I'll tell you why.

Over time, I'd like to develop a small open community where people are free to wonder about anything that takes their fancy.

The watchwords are: light, polite and in full sight.

Keep it light. Mindless abuse is not tolerated. While anonymous posters are welcome, I much prefer that you show the courage of your opinions by providing a nick at least.

I'll be talking about my little farm, juggling the commute, oddness I have encountered over the years and all manner of irrelevant stuff. You're more than welcome to do the same.
Posted by Starkadder at 3:42 AM 1 comment: